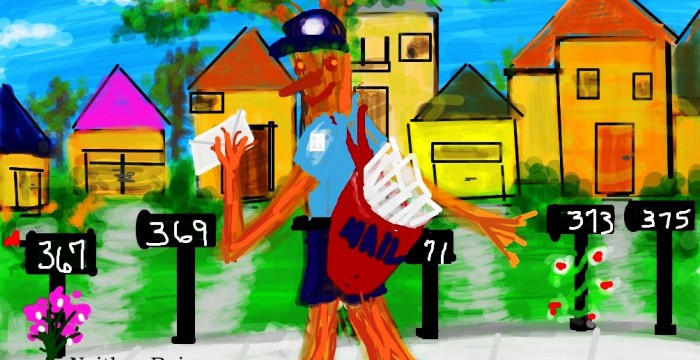 Remember the days when we all knew our postal carriers?  Before we worried too much about political correctness, we called them “mailmen” and they were a part of our everyday lives.  They would come to our homes 6 days a week, generally right up to the front door, sliding our mail through the slot or into the box mounted there.  We knew their names, they knew ours.  There was always time for a friendly greeting or a kind word.  Your “mailman” was a part of your neighborhood.  He was more than just a mail carrier, he was a friend.

Bob Stewart, Tyler Texas postal carrier and branch president, is still that guy!  In fact, Bob was the inspiration for my Tree Series Mailman.  Just watching Bob at his job – smiling, radiating good will and good times – I recognized someone who really enjoyed his work and his life.  Someone who found joy in all he did.  Oh, and Bob always wears shorts (no matter what the weather). The Tree Mailman was born. 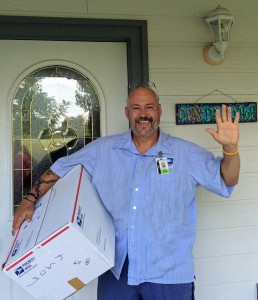 Although much of Bob’s regular route is curb-side and business delivery, he still walks about an hour and 45 minutes each day delivering mail to his customers’ doors.  No easy feat, considering that Bob has had two hip replacements, souvenirs from his days as a parachuter in the US Army.  And the East Texas heat – well, it’s the East Texas heat.  Still, Bob loves this portion of his route.  “It’s the best part of my day!” he declares.

Bob’s walking route includes a retirement community for independent seniors 55 and older.  “Most of the folks are 70 and older,” Bob explains, “and often they live alone.  I keep track of them and make sure everyone is okay.”  Bob remembers one incident in particular.  Mrs. X, in her nineties, usually meets him at the door to get her mail and say hello.  “If she’s going to be away from home, she generally lets me know,” he says.  So one time, when the previous day’s mail was still in her box and she wasn’t at her door for the second day in a row, Bob got worried.  He stopped at the community’s office and asked someone to call and check.  The complex’s personnel contacted the lady’s daughter.  Thankfully, everything was okay.  It turned out that the lady was staying with one of her relatives and her daughter had forgotten to notify the post office.  After that, Bob made sure Mrs. X had a stack of “hold mail” cards to leave in her box when she was gone, just in case.  He takes the same careful interest in all the people on his route.  Isn’t it good to know that this level of care and customer service can still be a part of our lives!

Many of Bob’s elderly customers watch for him each day – not just to get their mail, but to exchange a friendly greeting and a smile (Bob has no shortage of smiles!).  One customer’s daughter thanked Bob for his kindness, explaining that her mother looked forward to seeing him each day.  Some days, he may be the only person she sees, so Bob’s smile means a lot.

It’s not just Bob’s walking route customers who benefit from his exceptional customer service and unfailingly cheerful disposition.  I happen to among of the lucky people on Bob’s curb-side delivery route, so my experience is first-hand.

Bob always has time for a wave, a smile and a friendly exchange.  And so far, I haven’t seen anything throw him off his pace.  Example.  He never once complained about our injured mail box, even though it took us months (years?) to replace and had to be inconvenient for him.  I would have been leaving me nasty notes.  Bob just worked around the situation, and made sure we still got our mail, lopsided mailbox with nonfunctional door or not.  He knows everyone in the neighborhood by sight (and name), knows whose kids park in front of the mailboxes (he gets out of the mail truck and delivers the mail anyway), and knows who might need some assistance.  Bob goes that extra step to make sure he delivers the best possible customer service.

Bob has worked for the post office for 34 years and hopes to make it to 40, just like and in honor of his late father.  In addition to working his regular route, he has also been a branch president for the last 20 years, taking care of the smaller cities surrounding Tyler, investigating grievances, checking routes, training and mentoring new employees, and attending the National Association of Letter Carriers’ biennial conference.  Soon, he may be involved in the interviewing process, as he’s concerned about high turnover among newer employees.  “The job is harder than it looks,” Bob explains.  “Here in East Texas, the heat can be a serious health issue.  The trick is establishing your pace and staying hydrated.”

Another trick of the trade – Bob carriers milk bones for neighborhood dogs.  He’s only been bitten twice in 34 years.  The worst part of the job?  “The heat, no question!” Bob declares.  The best part?  “That’s easy, the people!  It’s the little things that keep us going and make it fun.  You have to have a positive and happy outlook on life,” he says.   Bob does and it shows!  He delivers more than just our mail – Bob Stewart delivers smiles and he delivers them with care!  Thank you, Bob Stewart, for still being “that guy” and keeping us connected! 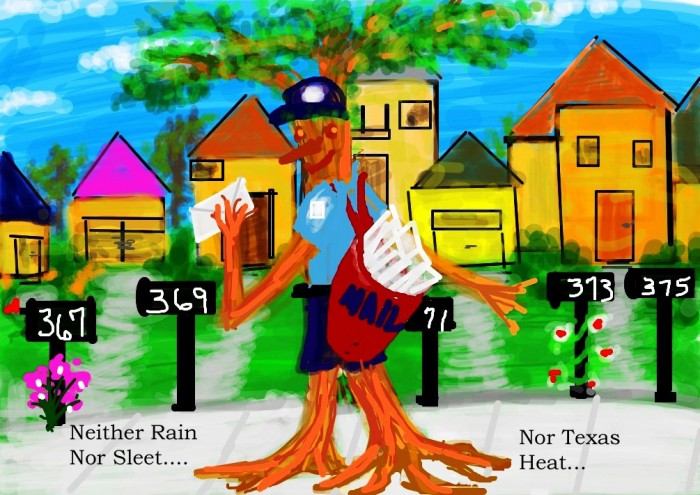 View all articles by Rita Fryer

This site uses Akismet to reduce spam. Learn how your comment data is processed.