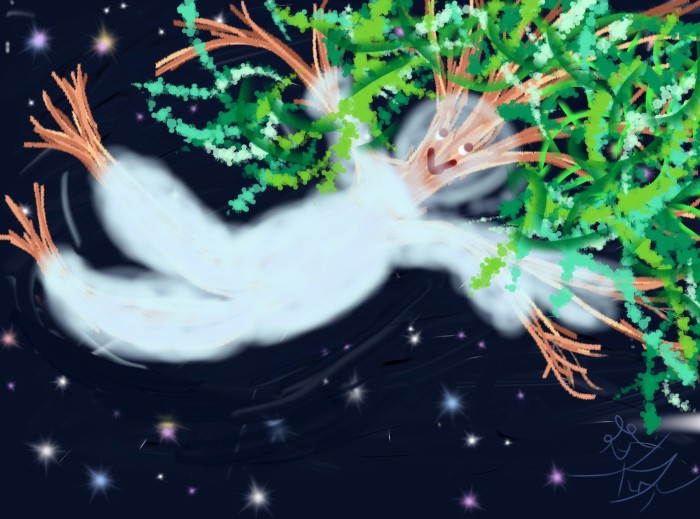 I met Jon Kavanaugh at the Tyler Mini-Maker Faire.  His booth was next to mine and couldn’t have been more different.  While I was displaying the happy prints, cards, and calendars from the tree-series, Jon’s display included a large model rocket, a sophisticated measuring device (more later), and the following challenge:

Design and launch a model rocket that holds 2 raw eggs (your astronauts – you must return them unbroken).  Your launch altitude should come as close as possible to 850 feet and total launch time should be between 48-50 seconds.

Sounds like “Mission Impossible” to me, but for a team of Ore City High School students, this is not only do-able, but fun!  With help from mentor and Rocketeer, Jon Kavanaugh and their science instructor, Vince Brach, Ore City students have competed in the Team America Rocketry Challenge (TARC) for two years running.  And the Ore City students are not alone.  According to TARC, “approximately 7,000 students from across the nation compete  … each year.”  (http://www.rocketcontest.org). 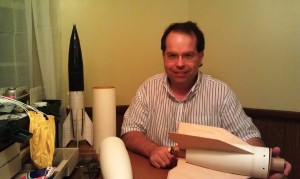 This is exciting, not just because it is very cool, which it obviously is, but because it’s a real-life, honest-to-goodness application of the math, science and technology kids are learning in school.  We all remember that frustrating learning experience – trying to grasp a difficult concept while part of our brain is saying “When will I EVER need this??” But if we could actually apply it and see it work – that’s something else entirely and that something can light the spark that changes lives.

That’s how it happened for Jon Kavanaugh.  Jon has a PhD in Electrical Engineering and works at General Dynamics as a Radio Frequency (RF) Engineer.    And he got there BECAUSE…

When he was 12, Jon saw some photos of kids launching model rockets and wanted in on the fun. He bought his first model rocket kit, then built and launched his first rocket.  But it didn’t fly properly – the engine he had purchased was too small.  So Jon decided to design his own, lighter rocket and try again.  “I used toilet paper tubes for the body, cardboard for the fins, and I believe I used a plastic Easter egg for the nose,” Jon laughs.  He launched again – this time his new rocket spun wildly out of control. “I was really curious about why it didn’t work,” says Jon, “so I ordered a membership kit from The National Association of Rocketry”.   And so began a life-long passion.

Jon got his first booklet about how to fly rockets and about rocket competitions.  Then, through the local library, he found The Handbook of Model Rocketry by G. Harry Stine.  This book had actual math formulas used to calculate rocket aerodynamics – a practical and actually fun application of the math he was learning in school.  When his high school got new Apple II computers, one of the instructors introduced him to computer programming.  Another “Ah-Ha!” moment for Jon. Realizing that his rocket formulas could run more efficiently, he set himself the task of writing a program that would do all the calculations.  Now, he could play with the fin sizes and other components and test out his theories on paper.   He was using “what if” analysis, writing computer programs to problem solve as he designed his rockets.  An engineer was born.

Can this happen for other kids?  Jon answers with an emphatic YES!

Earlier in his career, Jon read that America was falling behind other countries in STEM (Science, Technology, Engineering and Math) results.  “I remembered how rocketry helped me and thought it could still be useful to help kids learn,” Jon explained. He began looking for opportunities to work with kids using STEM.

At that time, Jon lived in an area of North Carolina that had its roots in the textile industry.  Kids there grew up thinking that they could work in factories, just like their parents.  They didn’t need college to sustain their life styles.  Even though the industry had moved away and there were fewer and fewer factory jobs, the cultural attitude was slow to change.  The high school drop-out rate was high and kids’ prospects were low.

Luckily, community leaders realized they had a problem.  The area chamber of commerce, local schools, and business and community leaders formed a coalition called “Champions for Education.”  Its purpose was to figure out and implement ways to educate kids and create interest in the areas where future jobs would be, namely STEM.  Jon joined the group!

One of the first initiatives was a program where professionals in the fields of technology, engineering and medicine visited 8th graders from different schools.  Doctors, engineers, and IT specialists talked to kids about what they did for a living and the education needed to get there.  Kids also took field trips to the participating companies.  Another initiative, a one-week summer robotics class, included engineering challenges for kids.  “The goal was to expose kids to engineering who might never have that opportunity,” Jon explained. During the lunch breaks, Jon and other experts would join the kids, answering questions, demonstrating ideas, and posing new challenges.

When Jon and his wife, Diane, moved to Tyler in October 2012, Jon hoped he would find new ways to promote STEM learning opportunities.  He didn’t have long to wait.  Vince Brach, a teacher at Ore City, found Jon’s name on the mentor list for rocketry and contacted him in January 2013.  Jon served as a team mentor in 2013 and again this year.  “Each year, the competition is a little different and offers new challenges,” Jon notes, “so the teams are always learning.”  Jon talks to the students about their designs and helps them on launch day.  Mr. Brach is also a serious rocketeer.  “Between the two of us” Jon smiles, “we can offer the kids a wide range of options.”

The TARC is scored and the low score wins.  In their first year, Ore City scored over 100.  This year, the team scored in the 50’s – a significant improvement.  “They got very close to qualifying for the finals,” Jon says, proud of the work the kids have done.  Jon and Mr. Brach are the only adults involved in the project, so it’s a true hands-on learning experience for the kids.

Although Jon and Diane are relative new-comers to Tyler, they have acclimated quickly.  Diane volunteers at Discovery Science Place and is President of the East Texas Outdoor Adventure Club.  Both are members of the East Texas Astronomical Society.  And of course, Jon continues to volunteer with the Ore City team.  In fact, the sophisticated measuring device he is designing – one that measures altitude, acceleration, and direction and is small enough to fit a model rocket – may be just the help the team needs to make the finals.

As I think about my talk with Jon and all the things I learned, I realize he is one of those fortunate people who have been able to blend the things they love and enjoy into a career.  But he has done much more than that.  He has found a way to share his passions and his gifts in ways that helps us all.  He’s making a positive difference – not only to the community, but also to the kids whose future is our future.   And he is helping to make learning what it is meant to be – FUN!

Thank you, Jon for sharing your story and helping kids soar to new heights! (Pun intended).

View all articles by Rita Fryer

This site uses Akismet to reduce spam. Learn how your comment data is processed.